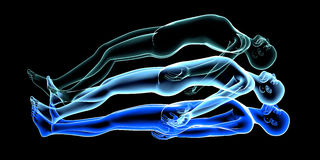 Mary’s hypnotic state deepened with each induction. She was tested at each level to evaluate her depth based on the Stanford Hypnotic Susceptibility Scale. When she reached level 8,Verbal Inhibition, we began in earnest.

She was never given direct suggestions. I was searching for reactions that would occur without clues of any type: I avoided leading her.

Soon, she described being with a man. She didn’t identify him, only that he was rough-looking and threatening. Then, the unexpected happened: Mary grimaced. I asked what was happening; she said he’d stabbed her with a sword. Later, the sword was identified as a Gladius, an ancient Roman short sword.

I was now faced with her report of a severe injury. I comforted her and suggested that she allow herself to feel the pain, but as if it were dulled. She showed some easing. Then another shock: She said she was dying.

Whether an actual reincarnational memory or fantasy, this was a threat to both of us. What could I do with someone who not only believed she was dying, but felt the pain and saw the flowing blood?

As I watched her writhe, my pulse quickened and my heart raced. This was far from what I expected–and so soon after beginning our research.

Something within suggested that I allow her to “die.” It was not mere curiosity. I was responsible for her well-being.  It was more: a form of inner guidance or instinct  that led me to believe it was the correct path.

During the late hours of that Winter’s night, Mary died at the hands of a two-thousand year old man.