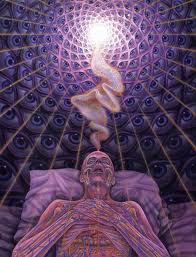 My muscles tightened with cold fear. In all the hypnosis books and journals I’d read, not one had mentioned a subject’s hypnotic murder and death. To the eye, Mary looked normal. She breathed slowly and regularly; not unexpectedly, her eyes moved under the lids as if she were looking about, scanning.

Should I try to bring her out of hypnosis? Or should I give her a suggestion to counter her declaration?

Gently, slowly, in a soothing voice I urged her towards ordinary consciousness for a debriefing and to examine her clinically. She opened her eyes and sat up, unshaken. Apparently, I was more fearful than she.

She described her experience in extraordinary detail, too quickly and spontaneously than someone aiming to please the researcher. What happened was real–at least to Mary.

I asked if she recalled anything after her “death ?” She described a limbo state, that she had left the scene of the slaughter, and felt peaceful and no pain. Unlike many sensationalistic reports (e.g., Bridey Murphy), the person she was under hypnosis was no one special, not the Holy Mother or some other significant historical or Biblical figure.

I asked if she wanted to continue and she agreed. This time, slipping into a deep hypnotic state was more rapid and easier. I suggested that she return to the last state…and waited. I was exhausted. After working with patients all day, it was now near midnight. I leaned my head back and closed my eyes to rest them. Suddenly, I felt a cold draft. I looked around, particularly at the curtain-covered windows. They were still, unmoving.

Mary’s eye movements were more active. I said, “Where are you?” “In a cave,” she answered. “An ice cave.”

I was stunned. How was it that, in my fatigue and in a closed office, I could feel that sudden chill, as if a cold breeze wafted over me? Was this coincidence…or telepathy?

I wondered what I could ask her without knowing where–or when–she was. I suggested she look down and asked if she wore any garments and, if so, to describe them. Under her lids, her eyes looked down. “Fur. I’m wearing some kind of fur.”

Surprised and uncertain, I searched my thoughts for the next questions. She needed to see herself, to describe her clothing in more detail to help orient me. “Look around the cave,” I said. “Is there anything shiny? Something that could reflect your image?”

She looked about, then said, “There’s a pool of water.” “Good,” I replied. “Look at yourself and tell me what you see.”

She tilted her head forward, then said matter-of-factly, “Oh. I’m a man.”